The coastal village of Shishmaref is losing ground due to rising sea levels. It is due to be the first village in the US to have to relocate because of climate change. 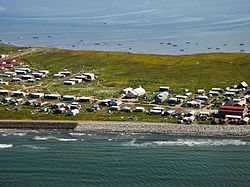 Shishmaref is home to 650 people. To put it into perspective, that’s the same amount of MPs that currently sit in the House of Commons.

The Shishmaref people are having to face leaving their beloved home behind because of rising sea levels, caused by climate change. Although this is tragic, there are bigger connotations to this. As Kate Sheppard at the Huffington Post writes, the incident at Shishmaref shows how unprepared we are to deal with climate change.

The issue with this hyper-modernised society is that many of us don’t feel impacted by the news of events across the world. To put this into perspective, as a resident of the UK if I told people a coastal village in Alaska was being forced to relocate because of rising sea levels caused by climate change, they’d most likely respond with So what? That doesn’t impact us? Perhaps I should think their response will be more gratuitous than that, but the point still stands; global instantaneous updates of the latest developments seem to have paradoxically made us feel more disconnected with the world. When we’re watching the ten o’clock news, it’s no different to watching an episode of EastEnders. To butcher a popular saying, What happens on TV stays on TV. Unless, of course, you’re directly impacted by the incident itself. Simulacra and Simulation by Jean Baudrillard explores this further for those interested in the notion of hyperreality.

Because we feel disconnected from the world around us it would make little sense for us to try and make it a better place, right? That’s one of the illogical sides of humanity. To put this into perspective, most arguments surrounding humanity place emphasis on the fact we are rational individual actors serving our own best interests. Reciprocal altruism (a biological theory popular here at Better World International as it argues humans are instinctively good) may support this to an extent as it may be in our best interests to be good to one another as it gives the person being helped more reason to help us back–great for survival in the days when we used to paint on caves and bash each other to death with wooden clubs! Woe is me for accurate historical representation.

However, assuming humans work to serve their own self-interests can sometimes conflate the bigger picture at hand. For example, it’s in an individual’s best interests to own a car and drive to work as it’s cosy, comfortable and efficient. However, what do you get when all the individuals get in their cars for work one morning and set off at the exact same time? Traffic jams! This, of course, leads to excess pollution and may possibly explain why humanity in of itself has struggled to deal with climate change. Though more academic research is needed on my part.

What can I do to change this?

Personally, I feel the first step of progression for humanity to combat climate change is to first realise its impacts are real and will affect us all.

The estimated cost of relocating Shishmaref is $180 million. This money could have been saved if we stop polluting so much. However, a group of individuals will not do anything to combat this. We need a single unified response to provide a coordinated social movement that will help us source our energy from sustainable energy sources. At Better World International, we often feature products which encourage sustainability .

It’s not just the financial effects that make the fight against climate change so poignant. A resident of Shishmaref gave the following heartbreaking statement to the Guardian:

Over the past 35 years, we’ve lost 2500 to 3000 feet of land to coastal erosion. To put this into perspective: I was born in 1997, and since then, Shishmaref has lost about 100 feet. In the past 15 years, we had to move 13 houses – including my dear grandma Edna’s house – from one end of the island to the other because of this loss of land. Within the next two decades, the whole island will erode away completely.

It must be chaotic living at Shishmaref at the moment, and this is all the more reason for us to take action now.

A study conducted by the US Government Accountability Office discovered 31 villages face an imminent threat from flooding and coastal erosion. We all saw the record-breaking floods sweep through St. Louis not too long ago. Climate change won’t go away if we try and sweep it under the rug. At Better World International, we place tackling climate change as one of our top priorities. One of our Collective Goals is to reduce fossil fuel usage by 80%.

Although $8 million has been pledged to towns like Shishmaref, surely it would better to stop climate change altogether than a sew-it-up approach?

Please comment below what you think, and help raise awareness about this vital issue which threatens to destroy our way of life.

Curious how to change the world? We have the answers!

GET IT ALL!
GREAT LISTEN!