We often think of people who changed the world as those who have (or had) fame, money and influence to help them bring about major changes. For several famous humanitarians, activists and leaders, this was the case. But what about those who didn’t have such tools? What about the ordinary people who have changed the world through selfless good deeds and acts of outstanding bravery? Better World International would like to celebrate these wonderful people, past and present, to show how kindness and courage can truly change the course of history.


This will come as no surprise to many! A humble Albanian nun with a mission to touch thousands of lives by nursing the sick, visiting the dying, educating the poorest children and going on countless missions. She spent 69 years in service of the world’s most in-need populations. She won 124 awards for her incredible humanitarian contribution and inspired thousands (during her lifetime and after) to dedicate their lives to helping others and changing the world for the better. Mother Teresa was awarded the Nobel Peace Prize in 1979 and was canonized on September 4th this year, only 19 years after her death. This article is dedicated to her life.

A few may know of the bravery Rosa Parks showed on December 1st, 1955. In the midst of the racial tension surrounding African-American citizens in the mid 20th century, she famously refused to give up her seat to a white person on a public bus in Montgomery, Alabama. She was swiftly arrested for violating segregation laws and subsequently fired from her job. It caused absolute outrage both inside and outside of the civil rights community, leading to a bus boycott led by Martin Luther King. After a year, the boycott successfully made bus segregation unconstitutional and paved the way for later victories of the civil rights campaign. Rosa Parks was a brave and passionate woman who changed the world and became a respected and much loved national symbol of the civil rights movement. 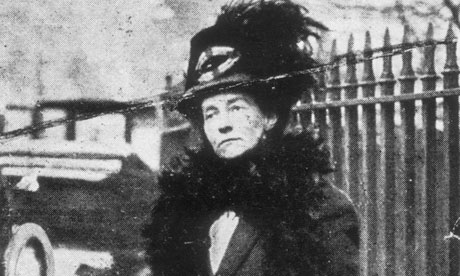 An avid member of Emmeline Pankhurst’s Women’s Social and Political Union, she was known for her extreme dedication to the suffragette cause in Britain. Her actions often resulted in her arrest for public disturbance and vandalization. She became a leading feminist figure of the suffragette movement following her dramatic death at the Derby in 1913 when she famously collided with a horse and rider.  It’s thought to be a major catalyst in gaining the vote for women in 1918.

On June 4th, 1989, a mysterious man bravely stood in front of a column of tanks after the Chinese military forcibly quelled the Tiananmen Square protests the previous day, killing thousands of students. He impeded the movement of the ‘lead’ tank as well as several others, and his actions were caught on camera and broadcasted worldwide. Nobody knows the fate of this courageous activist but he changed the world in a special way and became the symbol of the Tiananmen Square protests that were held by students fighting for democratic reforms, freedom of speech and the press.

A real hero of the millennials! This courageous 11 year old made global headlines when she was shot in the head by the Taliban, after she insisted that girls should be educated in Pakistan. Despite this horrific life-threatening injury she survived and continued to speak out for women’s education in her new home country, the UK. Even after receiving further death threats from the Taliban, she has never wavered from her cause. Her bravery won her a Nobel Peace Prize in 2013, making her the youngest ever to receive this award. Find out more about this incredible young lady.

Born a humble farmer’s son in the depths of rural England, Alexander Fleming had no inkling of the gargantuan effect his discovery of penicillin would have on the world. He accidentally discovered the superpower bacteria-killer whilst working as a scientist studying the influenza disease in 1928. After it was fully developed in the 40s, the drug completely revolutionized the medical world, saving innumerable lives and leading to the creation of many other life-saving antibiotics. Now it’s up to us to tackle the growing world-wide issue of antibiotic resistance, which threatens to leave us helpless against our bacterial enemy again.

Another obvious choice, perhaps, but this list would not be complete without a tribute to this incredible man. His lifelong dedication to religious harmony and social peace in South Africa and India, as well as his famous non-violent activism for India’s independence from the British Empire, has made him a staple household name. Gandhi is celebrated for bringing about significant change by protesting against some of the most terrible social and political issues that marked the early 1900s. Ken Surritte is another modern-day philanthropist who has changed the world through good deeds. Whilst working in Kenya to build a well for a children’s home, he discovered the reason the children were getting so ill was because of the stagnant, disease-infested water that they were drinking. Surritte has since founded the company, WATERisLIFE, that provides clean, safe water for people in developing countries all over the world. His work is incredible as waterborne diseases are a major killer in these countries and tackling this issue has the potential to save millions of lives. Read this cool article written by another Better World dreamer to find out more about this wonderful man.

It seems that changing the world begins within the heart. Doing good deeds and using your power to bring about even the smallest amount of positive change can cause a rippling effect. Get out there and change the world, dreamers! The power is in your hands.

If you’ve enjoyed reading this, subscribe to our newsletter and join the community of dreamers who want to change the world.

CEO at Better World International
Author, Social-entrepreneur, Activist, Nonprofit Owner and a dreamer!
Who believes that innovation and courage, comming from love to other people can create an amazing things
Did you see?